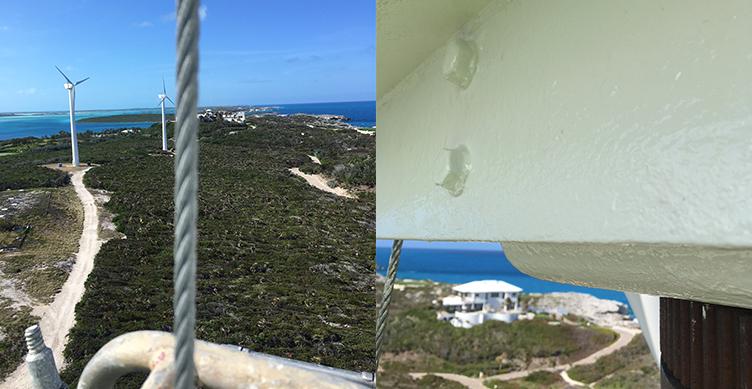 Over Yonder Cay is an exclusive private island nestled among the remote islands and islets of the Exumas island chain in the Bahamas. Accessible only by boat or seaplane, the island is sustainably powered by three wind turbines and a 1.5-acre solar field.

A two-man crew from Thomas Industrial Coatings enjoyed stunning views of the Caribbean, but it was no vacation. Instead, they spent three weeks hanging in a basket attached to a cable anchored to the tops of the wind turbines—all while being lashed by stiff ocean winds.

Specs of the job

This wasn’t a huge job in terms of square footage, but it was complicated. The Thomas crew’s assignment was surface preparation and coating the stems of three 120-foot wind turbines. The stems were subject to salt spray from the nearby ocean, which led to the formation of spot corrosion. The work included:

Safety is one of Thomas Industrial Coatings’ hallmarks, and it was a huge factor on Over Yonder Cay. Working while strapped into a harness and suspended in a small basket at height adds a whole new dimension to any industrial coating project.

First and foremost, each wind turbine was locked during the crew’s work. Working with massive blades still turning would have been too dangerous.

Second, the crew members worked in shifts. One was suspended in the basket while the other remained perched atop the turbine to ensure the cable holding the basket remained securely anchored. As a failsafe, the worker in the basket was equipped with a Miller SafEscape fall protection system.

Finally, the crew added a secondary tether to keep the work basket secured to the turbine’s stems. Without it, strong winds would toss the basket around, making work extremely dangerous.

Whether on a massive wind farm in the Great Plains or a handful of turbines serving a private Caribbean island, Thomas Industrial Coatings has the experience necessary to complete these critical maintenance jobs safely.

Thanks to the crew’s hard work, the three wind turbines supplying Over Yonder Cay’s electricity are once again ready to stand up to their severe service environment.

Are your turbines due for a new coating? Request a bid now to get started, or read our guide on what to look for when hiring an industrial painter to see whether we’re the right fit for your next turbine coating project.