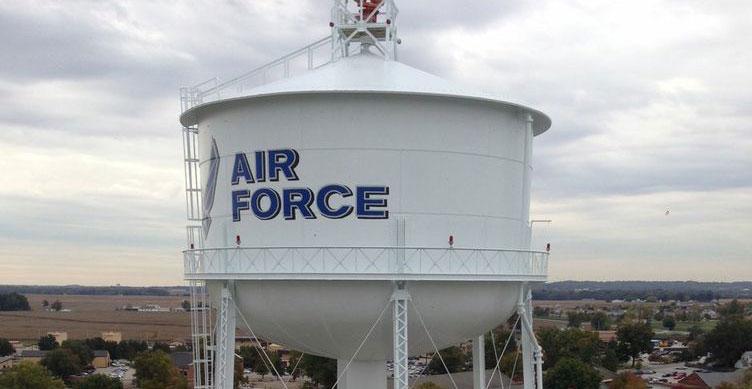 Thomas Industrial Coatings crews provided a number of storage tank maintenance services for two tanks managed by the American Water Company at Scott Air Force Base in St. Clair County, Illinois. In addition to adding a fresh coat of paint, crews wanted to make sure the owners got the maximum lifetime out of their new coatings system.

Initial services were intended to remove possible points of failure for the new coating system. Spider rods, which are used as support during the building process but no longer necessary once the tanks are completed, were removed, along with the painter rings that acted as tie-off points during the original construction. Both of these holdovers were identified as potential points of failure for the new system, so they were removed prior to its application.

Rigging couplets were installed on each of the tanks before crews began the interior work. These couplets act as support for the staging systems that allow crews to safely work high on the interior walls of the tank. They will remain on the tank and allow similar coatings jobs to be replicated in the future. An updated attachment system was also installed on the internal and exterior ladder systems, as an added safety measure for personnel operating on the tanks.

An abrasive blast was then performed on the tank interiors, followed by sanitation and testing to ensure the tank was adequately clean to once again hold drinking water. This completed the interior portion of the storage tank maintenance.

Next, the exterior of the tanks were power washed before an overcoat was added. The previous coating had left a chalky residue which needed to be removed before the outer coating was added, to ensure the new coating’s adhesiveness.

After the outer coat was added, crews then proudly hand-painted the official Air Force logo and the words “Air Force” on the tanks exterior. These logos will stand above the base for a long time to come, in support of the brave servicemen and women of the United States Air Force.