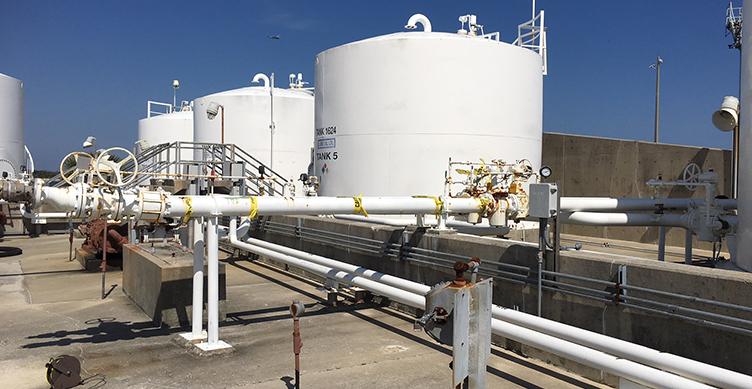 Naval Station Mayport is a strategically-located seaport and airport at the mouth of the St. Johns River near Jacksonville, FL. The installation is home to the U.S. Navy’s 4th Fleet.

To keep the sea and air operations war-ready, the base relies on a fuel pipeline that runs from a seaside unloading pier to a network of fuel storage tanks.

When Thomas Industrial Coatings was chosen to abrasive blast and coat the pipeline, instructions from the Navy were clear: Do a flawless job, and don’t spill anything.

Mayport’s pipeline stretches more than a mile, starting at sea and heading inland to the storage tanks that keep the base supplied with both diesel and jet fuel to support air and sea operations at Mayport.

Thomas dispatched a crew of seven to complete the coating project that consisted of:

In total, the Thomas crew prepared and coated 20,000 square feet of pipeline, some of which runs above sandy beaches. Beaches are at elevated risk of negative environmental impacts in the event of a fuel or oil spill, including damage to plant and animal life on land and at sea. That risk figured prominently in how the crew completed its work.

Extreme caution from start to finish

U.S. Navy environmental personnel kept close watch over the project from the beginning. Their commitment to protecting the surrounding natural environment meant the crew had to abide by some of the most stringent environmental regulations they’d ever seen.

In addition, the crew faced added pressure knowing the pipeline would not be shut down while they worked. Navy bases don’t take days off, so the pipeline had to be kept live at all times.

Thanks to the hard work of the Thomas Industrial Coatings crew, the fuel line serving sea and air operations at Naval Station Mayport remains in pristine condition, standing up to the harsh seaside environment and the nonstop needs of the Navy.

Our work can’t hold a candle to theirs, but nonetheless Thomas Industrial Coatings is truly proud to have completed several military coating projects that have helped the armed services in their critical missions.

Thomas treats every pipeline job like it’s for the Navy, assuring safety and diligence every step of the way. Request a bid to start discussing your next project.