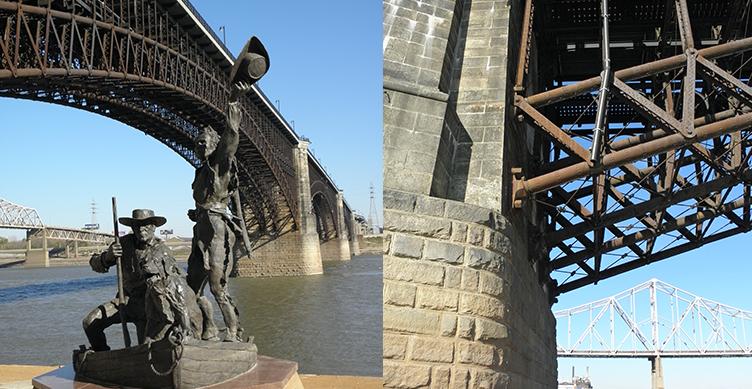 Opened on July 4, 1874, the Eads Bridge was the first of its kind to be made of true steel in the U.S. and was a literal gateway to the west. The bridge is still in use today, with a road deck and pedestrian walkway set above a light rail system.

Thomas Industrial Coatings began work on a rehabilitation of the bridge in July 2012. The first hurdle was to provide a working platform for the team of painters to access all parts of the bridge. The platform was also utilized by steel workers to execute repairs and install new steel members. Safespan decking was installed below the track system and also under the bridge’s famous archways. To install the platforms, barges ferried the deck materials to spud barges staged with 120-foot man lifts used to aid assembly. The decking followed the trajectory of the bridge in two different layers to provide a stable work area to stage equipment.

Containing the bridge provided another challenge. Each span was divided into 42 to 45 sections and three to four sections were contained at one time. Swing stages and basket hoists were used to install a SSPC-Guide 6, Class One containment. A 60,000 CFM dust collector was used to provide the proper ventilation. The tarps for the containment were hoisted from the spud barges to the Safespan platform. Because this was a lead abatement project, it was significantly important to install secure containments to ensure the safety of the workers of all trades, as well the general public and the environment.

The abrasive blasting posed several challenges, some of which were the most difficult ever encountered by Thomas Industrial Coatings’ team members. This was the first time the bridge was taken down to bare metal. In most sections, as many as nine coats of paint had to be removed. The scope of work called for a SP-10 near white metal blast. The composition of round piping, multiple bolts patterns, and x-braces created many significant access issues throughout the project. Swing stages, pick and cable, and climbing were used as a means to access the steel from the work platform.

A three-part coating system of zinc, epoxy and siloxane was chosen as the paint to be applied to the bridge. Carboline was the company chosen as paint vendor. A system of Carbozinc 859 Primer, Carboguard 888, and Carboxane 2000 was used. The project required 8,600 gallons of paint.

As with any project in the Midwest, weather played a major role. Winds moving up and down the river made it difficult to maintain containments. Rising river levels during spring and winter floods at times caused the demobilization of the construction yard, disrupting progress for the entire project.

Thomas Industrial Coatings concluded its portion of the project in May 2016.

Pride in the project

Thomas Industrial Coatings is proud to have worked on a project of this complexity and significance, and we’re especially proud that we were able to work together with other contractors to complete our part of the job without having to stop trains from shuttling thousands of commuters, students and tourists across the Mississippi River each day.

Thomas Industrial Coatings was recognized for its work on this project, winning the SSPC’s George Campbell Award for completing a difficult or complex industrial coatings project.